My husband was on the news a few months ago, did you see him?  Well, more on that in a minute.

At church I work with the Young Women.  I love it.  And this summer we are preparing to go on a Pioneer Trek in Wyoming.  To get ready, we are each to choose an ancestor to remember as we walk.  One of my ancestors is Sarah Crossley, who was just 12 years old when she walked in the fated Martin handcart company.  I got to read part of her journal describing their ordeal.  I cried as I thought of myself or my own daughter living in such conditions.  But I realize that I will probably never really understand, because how can anyone know who hasn’t lived through that?

As I read I was reminded of an experience earlier this year.  My husband is a bit of a daredevil.  He enjoys snowmobiling in the winter, and this past January he and some friends got stranded in the back country during a blizzard.  One of them had brought a satellite tracker and they were able to send a distress call.  Search and Rescue teams were deployed and they were rescued 37 miles from where they had started.  I was of course worried, but again, I didn’t have a real idea of where they were or what they went through.

A few days ago, I got a glimpse.  We still have the GPS coordinates from the satellite beacon, so we took a long winding drive.  After over an hour twisting on small dirt paths in the wilderness, we came to the spot. 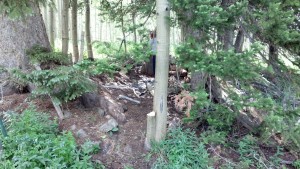 It looks pretty now, but my husband said that in the winter everything looked barren and white.  They found refuge under two big pine trees and were able to start a fire.  But they had no way to get out.  They were literally stranded.  Part of Sarah Crossley’s journal sounded familiar:

“We had not reached Sweet Water River and our provisions were gone.  We found a small ravine since named Martin’s Ravine.  Here we made our camp in a clump of willows that grew close together.  We settled down as we could not go on farther.  We must wait for help or death must come to us. Few of us cared which.  In the morning to add to our suffering a heavy snow had fallen upon us.  We had camped in a circle so we did not know which way to go or from which we had come.  here we were lost, starving, and buried in two feet of snow.  Three days we lived through this and then at the sunset from over the rim of the ravine came a covered wagon with men breaking a road for horses.  Such cries of joy were never heard before.”

I was able to see a glimpse of what it means to really be rescued.  To be so totally lost and without hope, and then for salvation to come over the hill.  I was struck as I read that only 146 people made it to Salt Lake, out of 584 who had started.  My great-great-great-great grandma was a survivor, and that is part of me.  She faced despair with faith.  She didn’t know what was coming next but she persevered.  And that’s all part of me, and always has been.

So that’s what I have learned from Trek.  And we actually head out next week.

Posted in Notes from Steph